Getting a Mortgage When the Fed is Raising Rates 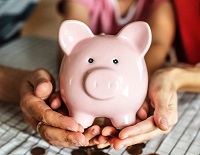 Many people become worried or discouraged about getting a mortgage when the Federal Reserve is in the news raising interest rates. Mortgage rates have been increasing gradually over the last year: The 30-year mortgage rate climbed from 3.99% on Jan. 11 to 4.63% on Dec. 13th, according to Freddie Mac.

Hawaiian proverb. “It was nearly daylight before the (hauliuli) fish began to bite.”
Said of a person who, after long waiting, was about to give up, but whose
perseverance finally gets his desire in the end.

And ironically, one of the reasons the Federal Reserve increases the rates on these short-term loans, or otherwise tightens the money supply by selling treasuries and taking cash out of circulation, is to keep home loans relatively affordable.

That is, by increasing the overnight rate, the Federal Reserve can actually help lower mortgage rates, and help make it affordable to borrow money.

How Mortgages are Priced
Any banker or lender who wants to stay in business and do right by depositors needs to put a price on a loan. That price is called interest, and it has to cover three main costs:

Over the course of a 30-year mortgage, inflation takes on a much bigger weighting: Nobody wants to lend a dollar today that will be repaid 20 or 30 years hence with dollars worth only a fraction of what they were when they made the loan. But that is essentially what lenders risk if they misprice interest rates.

Now consider the Fed’s position: Inflation is simply what happens when too much money is chasing too few goods. When the economy heats up and generates too much money, compared to the increase in investments, goods and services that can productively absorb the increase in the money supply, prices rise, and inflation strangles people living on a fixed income.

It also makes mortgage lenders very nervous, and they boost interest rates to compensate for it. That’s the free market at work.

This helps to put a lid on long-term interest rates – and can even drive them down.

Meanwhile, traders tend to sell stocks, or at least bid down what they’re willing to pay for a share of stock, when the Federal Reserve is tightening, since the likely result is slower-than-previously-expected economic growth. Stocks tumbled today (the day of and the day following the Federal Reserve rate hike)

When they sell stocks, or when they park money that didn’t go into stocks because they were unwilling to pay the current prices for stocks at the currently reduced economic growth outlook, they have to put that money somewhere where it will get a decent return relative to the risk. And often, that means bonds and bank deposits – which help fund mortgages.

Again, by indirectly increasing the amount of money available to fund mortgage lending, the Fed contributes to lowering mortgage interest rates when it makes a judicious and well-timed move to increase the federal funds rate or take other measures to slow the economy.

Of course, this is a delicate process, and while the Fed has vast resources of statistics and information available to it to inform the decision-making process, it really has just a few clumsy valves with which to control the whole U.S. banking and credit system:

• It can increase the rate it charges banks at the overnight lending window;
• It can buy or sell treasuries, injecting money into the system or taking money out of it.
• It can force member banks to increase or decrease the amount of cash on hand or in reserve to back loans
• It can adjust the amount investors can borrow “on margin” to fund stock market investments.

That’s about it. And the first two are by far the more important. Indeed, as of Q3 2018, most home lending isn’t even being done by banks, but by non-bank lenders that aren’t even regulated by the Federal Reserve.

None of this changes the fundamentals of getting a mortgage much for the average consumer. And we’re happy to see mortgage rates coming down in recent weeks.

Now, a rising interest rate environment does affect your decision in a couple of ways:

It may also increase the attractiveness of fixed-rate mortgages, relative to adjustable-rate mortgages. But that has more to do with your individual situation and expected time frame before you either sell or refinance your home than it does with any decision the Federal Reserve made this month or this year.

Any questions? Give us a call, and we’ll find the best loan for you, at an affordable price.

Get pre-approved for a mortgage now! Start the process by calling (808) 891-0415! Or fill out our online initial application here.

We look forward to helping you buy your dream home, or helping you refinance a current property.